Tune in to WXXI January 25th-31st for Dialogue on Disability: The Herman & Margaret Schwartz Community Series. 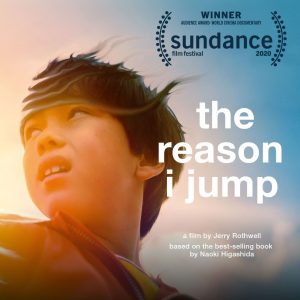 Helping to kick off this year’s programming, the Little Theatre is offering virtual screenings of The Reason I Jump available online to view at your convenience.

Based on the best-selling book by Naoki Higashida, this film highlights the experiences of nonspeaking autistic people from around the world. Winner of an audience award at the Sundance Film Festival, the documentary blends Higashida’s insights, written when he was just 13, with intimate portraits of five remarkable young people.

Then join us for a virtual panel discussion on Tuesday, January 26th at 6 p.m. on Facebook.
Taking part will be Al Sigl Community of Agencies President Tom O’Connor and Golisano Autism Center Director Beth Ciardi, moderator Evan Dawson, and panelists:
• Jerry Rothwell, documentary filmmaker and director of The Reason I Jump
• Clara Washington, the parent of a non-speaking person
• Teddy Milko, a non-speaking autistic young adult
• Sarah Milko, Executive Director of AutismUp and mother of Teddy

For a full list of programming during January 25-31, please visit wxxi.org/dod

Dialogue on Disability: The Herman & Margaret Schwartz Community Series is  made possible through funding by the Fred L. Emerson Foundation. The week-long series is part of a year-round partnership between Al Sigl Community of Agencies, WXXI, and The Golisano Foundation.

The partnership, called Move to Include, raises awareness about education, healthcare, housing, recreation, employment and local efforts to support inclusion – through television, radio, news, special events, and social media. The initiative works to inspire and motivate people to embrace different abilities and include all people in all aspects of community life. In 2019, the Corporation for Public Broadcasting funded the expansion of Move to Include to five additional public media stations around the nation.